Bitcoin price continues to encounter resistance at the $50,000 level, but the rounding bottom pattern seen in most altcoins is a signal that traders intend to push prices higher. 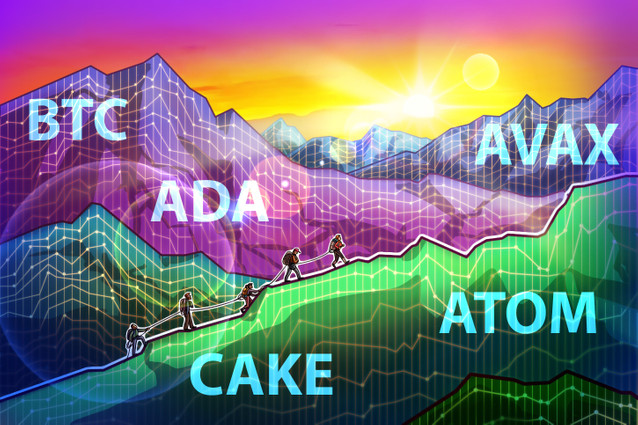 Monitoring resource Material Indicators pointed to a lot of puts at the $50,000 strike price and the “positive funding almost across the board (overheated),” which suggests a rejection at the current levels and a “pullback going into September.” 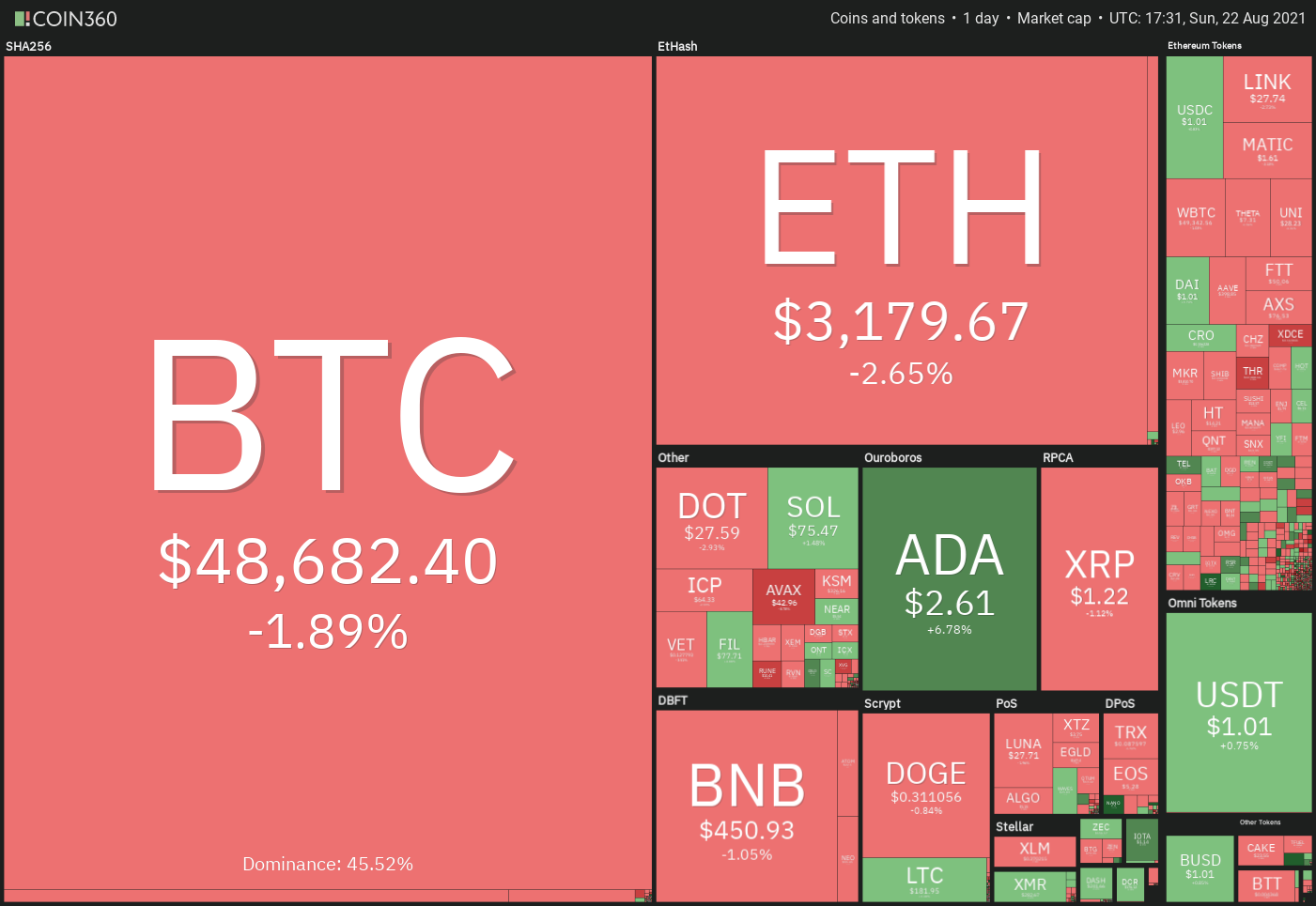 Nikita Ovchinnik, chief business development officer of 1inch Network said that several new institutional investors had taken exposure to crypto in the past year, and that “they didn't come for short-term gains.”

Another positive sign for the crypto sector is the ever-growing list of unicorns. Analysts expect more companies to join the list as the adoption of crypto and blockchain increases.

Bitcoin’s hesitation near the $50,000 mark may shift focus to altcoins? Let’s study the charts of the top-5 cryptocurrencies that are likely to attract traders' attention in the short term.

Bitcoin rebounded off the 20-day exponential moving average ($45,049) on Aug. 19 and the bulls pushed the price above the stiff overhead resistance at $48,144 on Aug. 20. The bears are currently attempting to stall the up-move at the psychological resistance at $50,000. 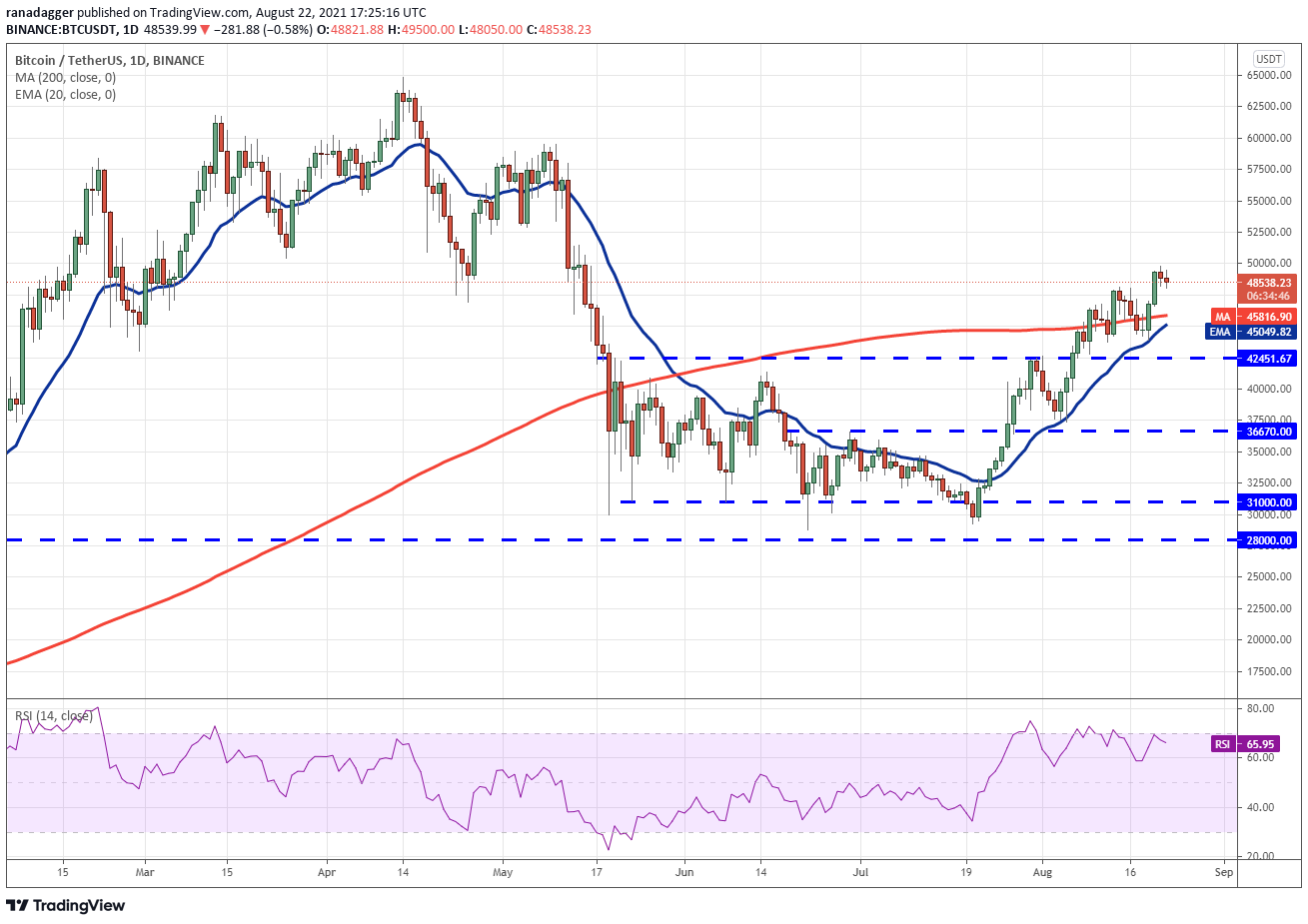 If bulls do not give up much ground and flip the $48,144 level to support, it will indicate strength. The BTC/USDT pair could then pick up momentum and start its northward march toward $58,000.

The rising 20-day EMA and the relative strength index (RSI) in the positive zone suggest that the path of least resistance is to the upside.

Alternatively, if bears pull the price below $48,144, the pair could drop to the 200-day simple moving average ($45,816). This is an important level for the bulls to defend because a break below it could embolden the bears.

The sellers will then try to sink the price below the breakout level at $42,451.67. If they succeed, it will suggest the start of a deeper correction. 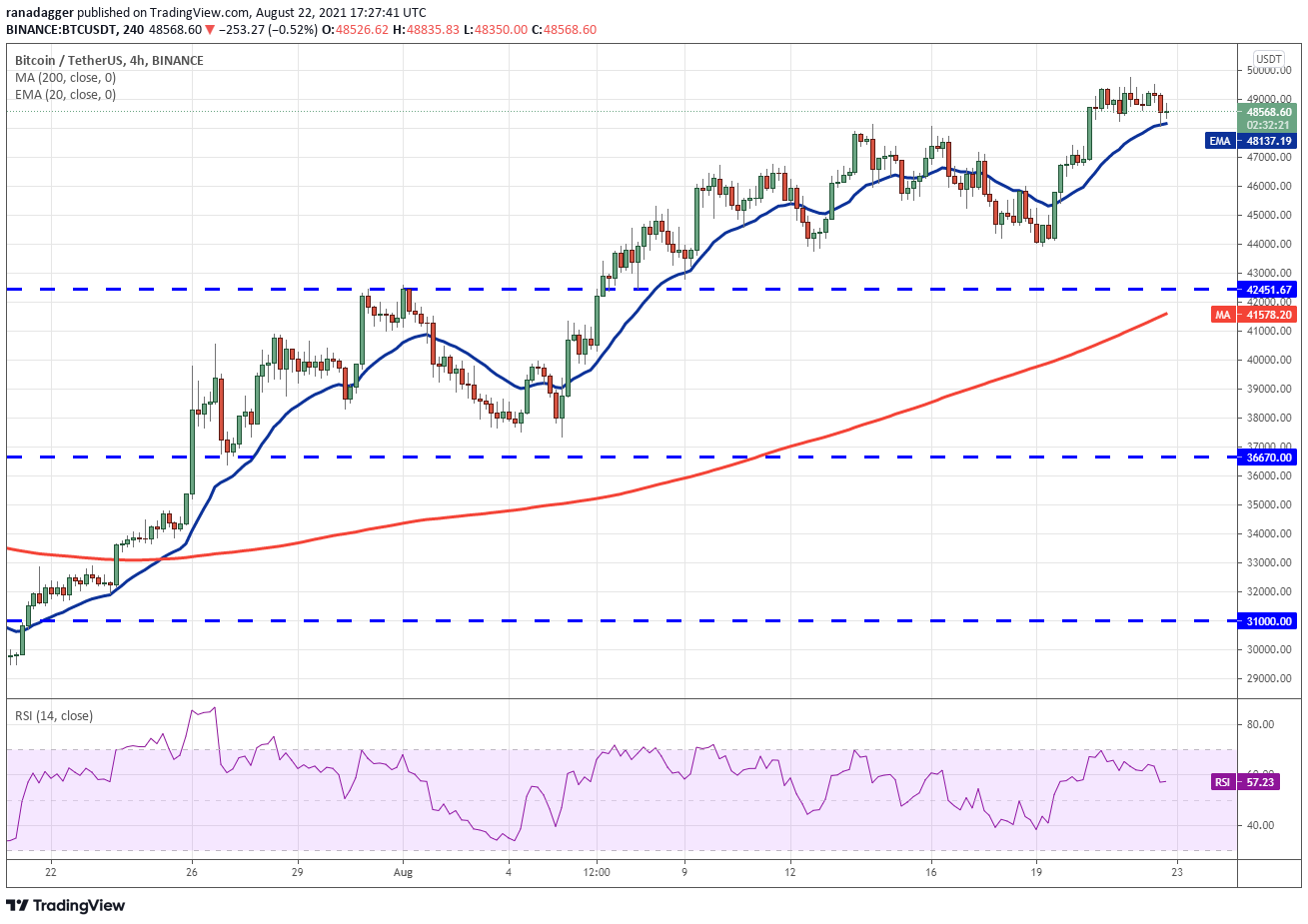 If that happens, it will suggest that the bulls are losing their grip and the pair could then remain range-bound between $44,000 and $50,000 for a few days. The bears will have to pull the price below $42,451.67 to gain the upper hand.

Cardano (ADA) is in a strong uptrend. The bulls pushed the price above the all-time high at $2.47 on Aug. 20 but the long wick on the day’s candlestick showed selling at higher levels. The altcoin formed an inside-day candlestick pattern on Aug. 21, indicating indecision among bulls and bears. 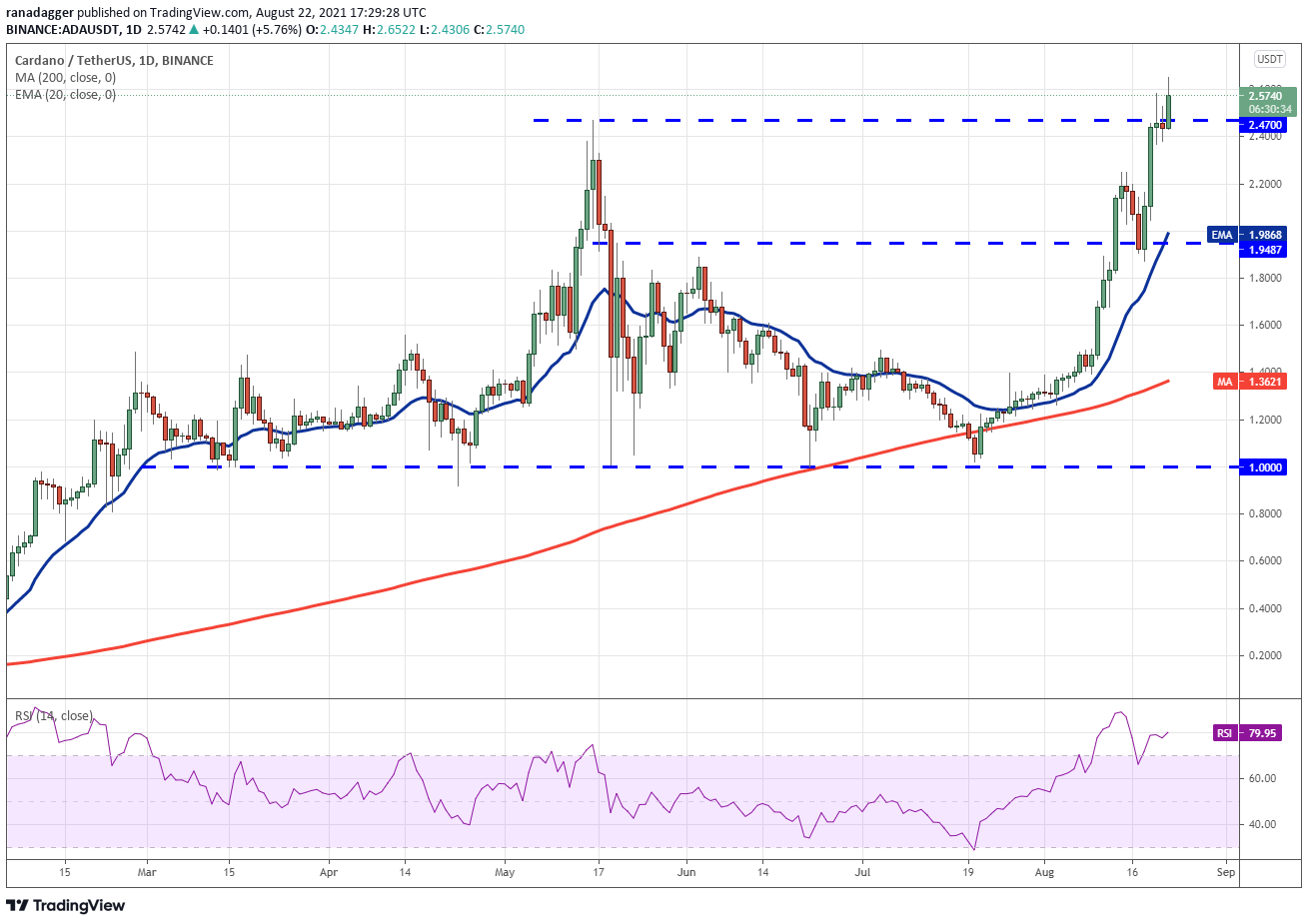 The uncertainty resolved to the upside today as the bulls have again pushed the price to a new all-time high. If buyers sustain the price above the breakout level at $2.47, the ADA/USDT pair could rally to $3.

However, the long wick on today’s candlestick suggests that bears are unlikely to give up without a fight. They will try to pull the price back below $2.36 and trap the aggressive bulls. If that happens, the pair may correct to $2.20.

If the price rebounds off $2.20, the bulls will again try to resume the uptrend. A breakout and close above the $2.47 to $2.65 will enhance the prospects of the continuation of the uptrend. Alternatively, a break below $2.20 could pull the price down to $1.94. 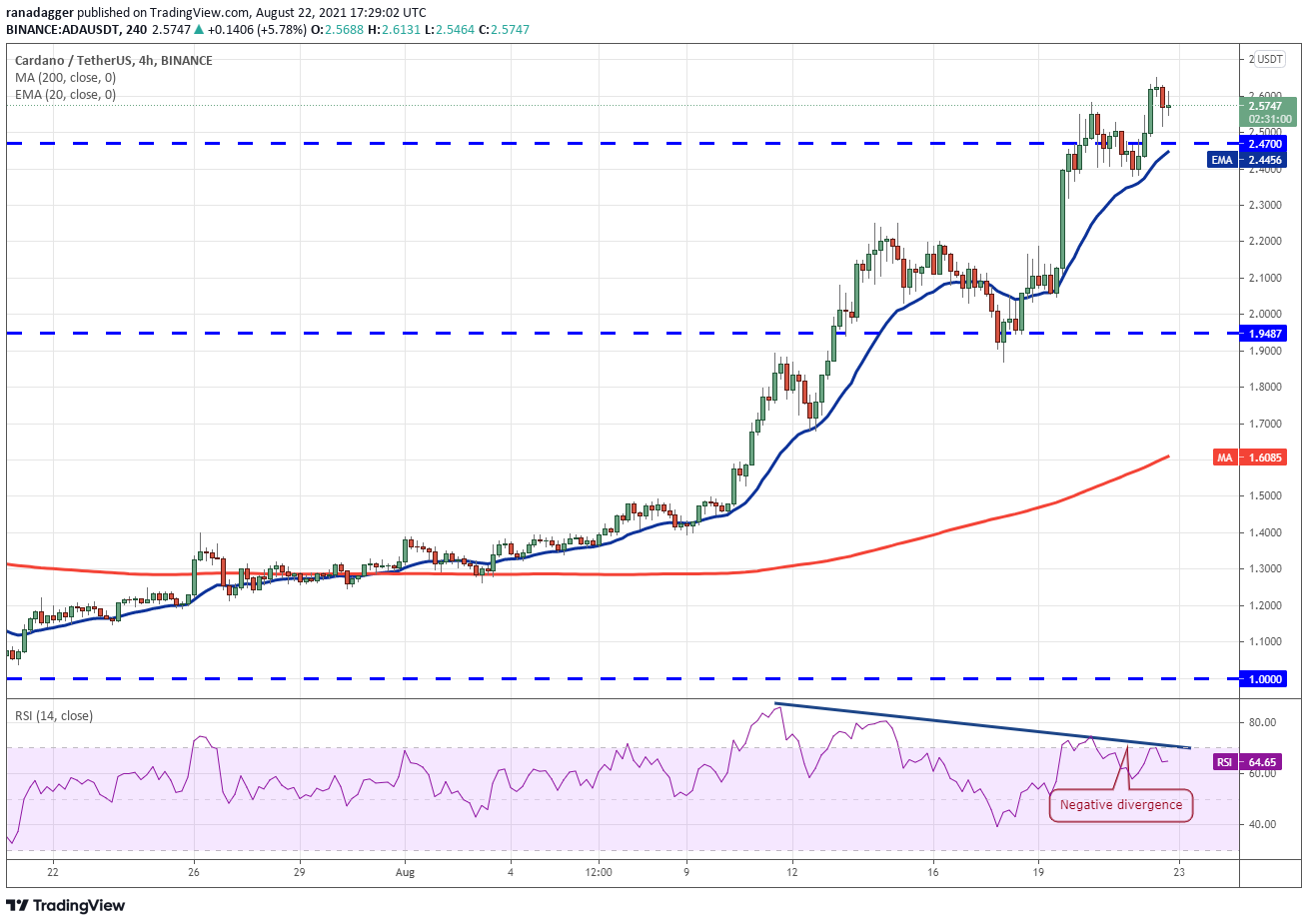 The 4-hour chart shows the 20-EMA is sloping up but the RSI is forming a negative divergence. This suggests that the bullish momentum may be slowing down. The first sign of weakness will be a break below the 20-EMA.

Contrary to this assumption, if bulls do not give up much ground from the current level, it will suggest strength. That could attract further buying and the pair may then rally to the psychological resistance at $3. 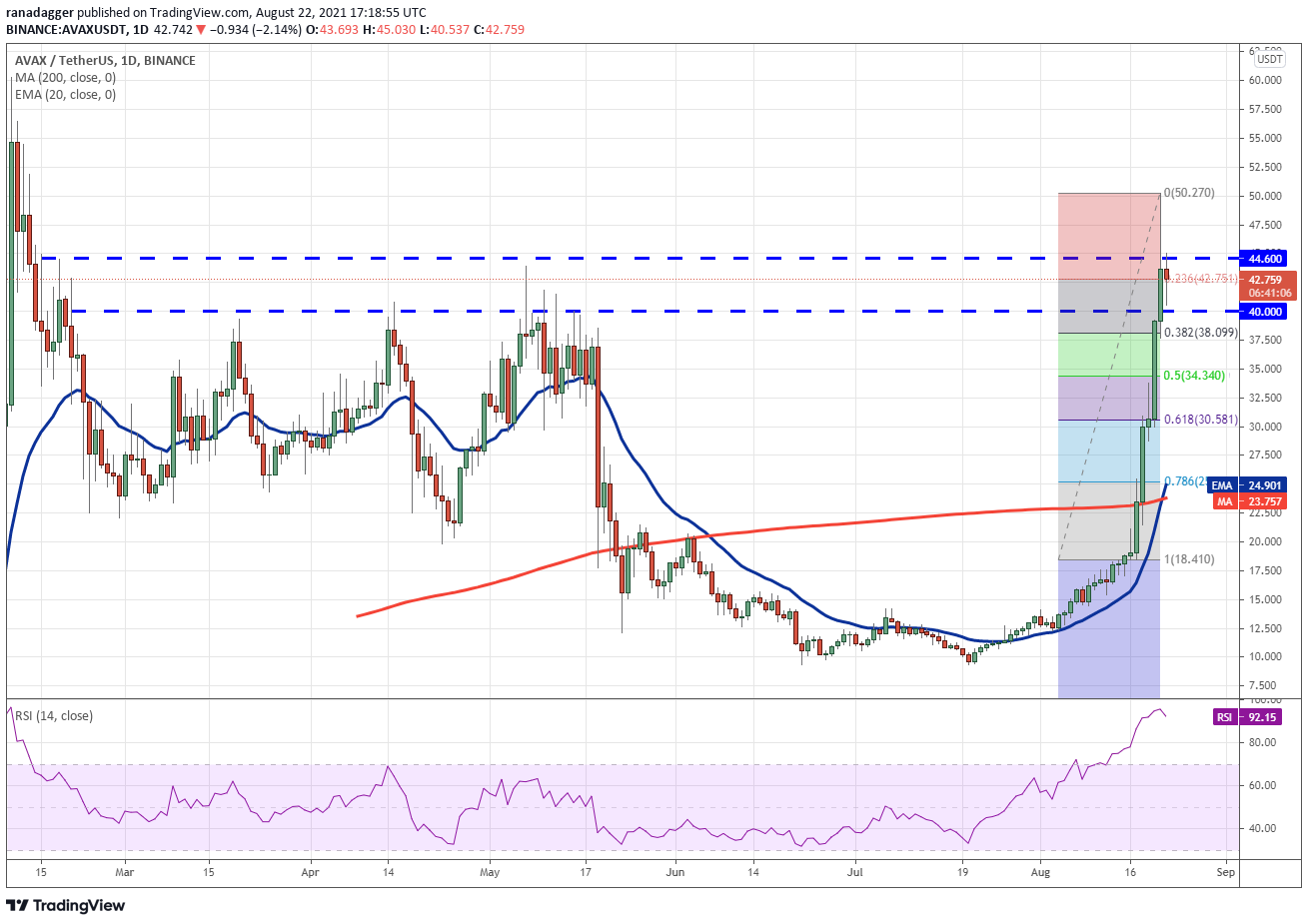 The long wick on the Aug. 21 candlestick shows that bears are attempting to defend the psychological resistance at $50. On the downside, the first support is at $40. If the price rebounds off this level, it will suggest that bulls are not booking profits aggressively as they anticipate the rally to continue further.

A breakout and close above $44 could improve the prospects of a retest of the all-time high at $60.30. 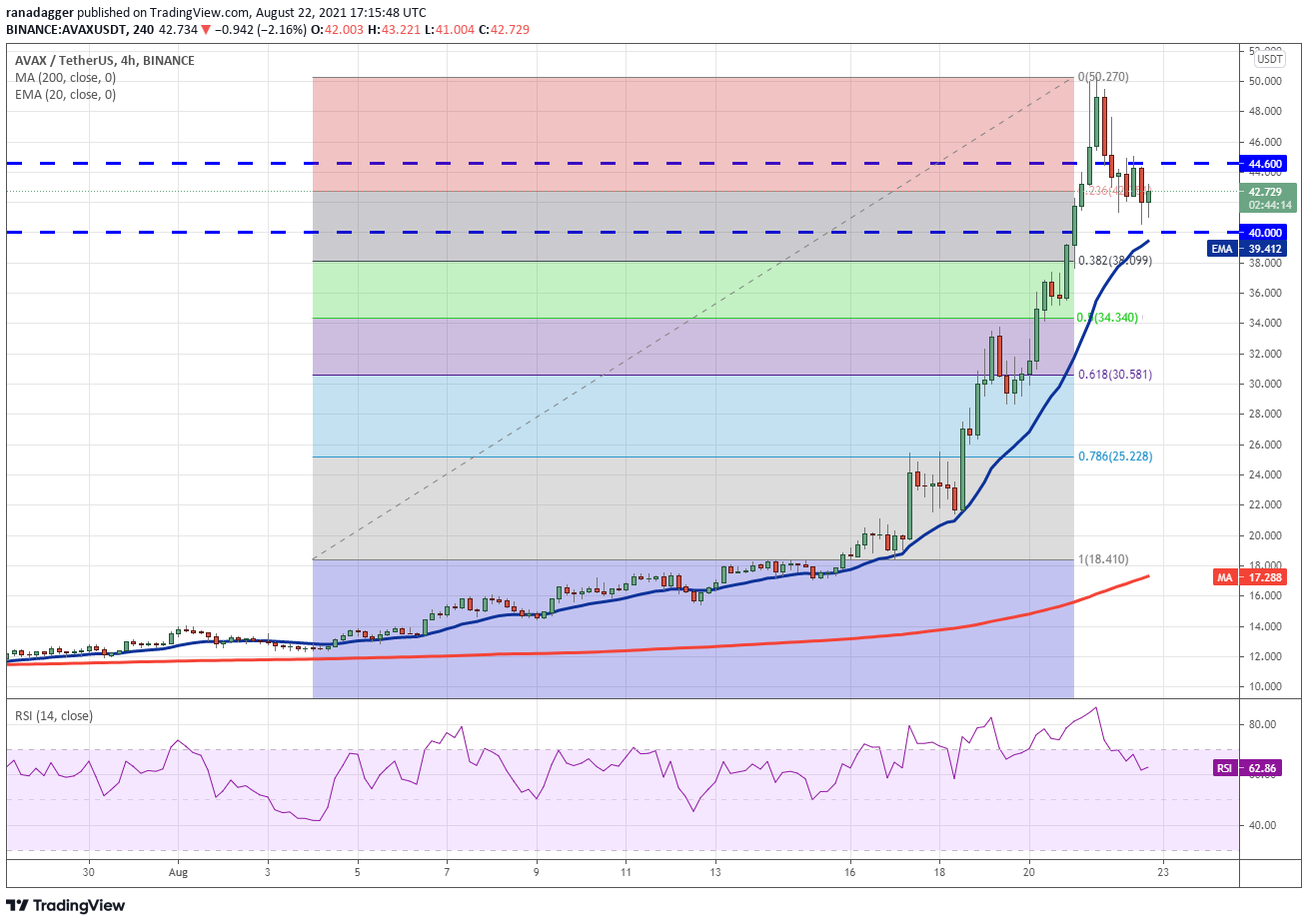 The 4-hour chart shows that bears are attempting to stall the relief rally at the overhead resistance at $44.60 and the bulls are buying on dips to $40. This suggests that the pair could remain range-bound between these two levels in the short term.

If the bulls drive the price above $44.60, the pair could rally to $50.27. A breakout and close above this level will signal the resumption of the uptrend. Conversely, a break below the 20-EMA will indicate that traders are booking profits and not buying the dips. That could signal the start of a deeper correction.

PancakeSwap (CAKE) is currently in a strong recovery. Sustained buying by the bulls pushed the price above the 38.2% Fibonacci retracement level at $22.74 on Aug. 20. 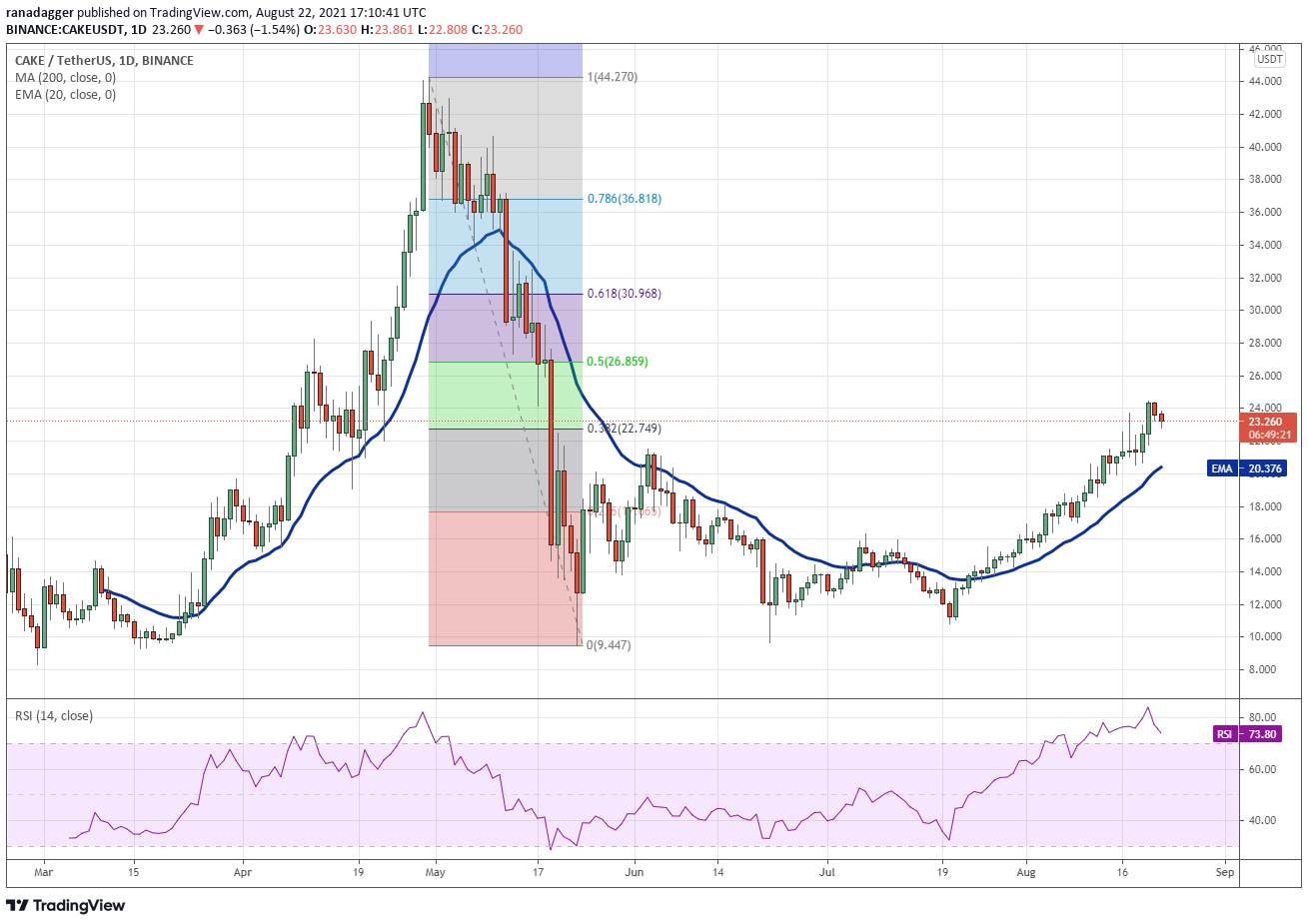 On the way down, the critical support to watch out for is the 20-day EMA ($20.37). If the price rebounds off this support, it will suggest that sentiment remains positive and traders are buying on dips. Conversely, a break below the 20-day EMA could open the doors for a further decline to $16. 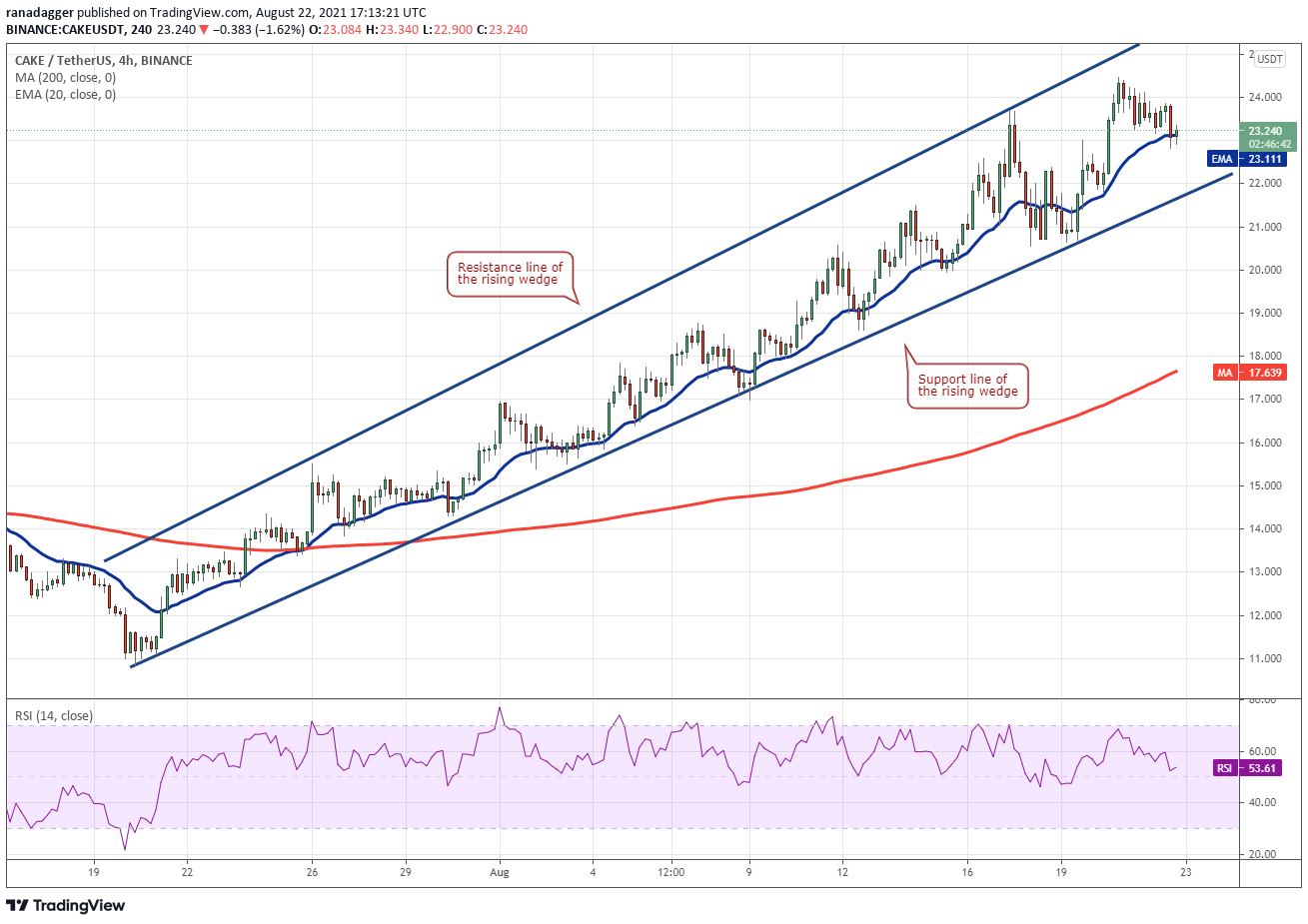 The 4-hour chart shows the price is trading inside a rising wedge pattern. If bears sustain the price below the 20-EMA, the pair may drop to the support line of the wedge. This level is likely to act as a strong support and a sharp rebound off it will indicate that traders are buying on dips.

A breakout and close above $24.65 will suggest the resumption of the up-move. The next target objective on the upside is the resistance line of the wedge. The bullish momentum could pick up if bulls thrust the price above the wedge.

Cosmos (ATOM) had been trading in a large range between $8.51 and $17.56 since late May. The bulls pushed the price above the resistance of the range on Aug. 18, clearing the path for a possible move to the pattern target at $26.61. 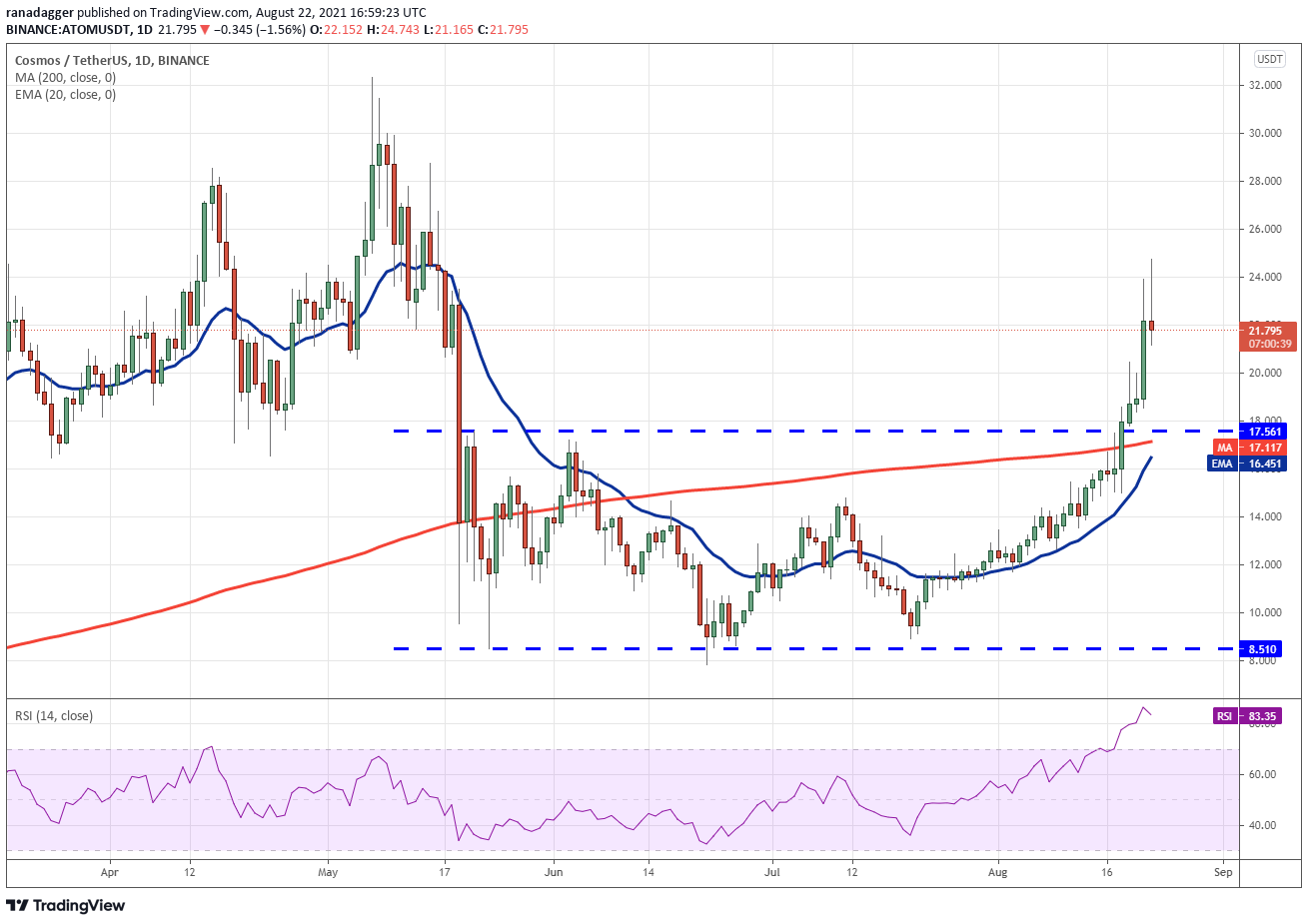 However, the long wick on today’s candlestick and the RSI above 83 suggests the rally is overextended in the short term. This could attract profit-booking by the bulls, resulting in a minor correction or consolidation in the next few days.

If bulls do not give up much ground and flip the $17.56 level into support, the ATOM/USDT pair will again try to resume the uptrend. A break above $26.61 could open the doors for a rally to $28 and then to $30.

The bears will have to pull and sustain the price below $17 to invalidate the bullish sentiment. 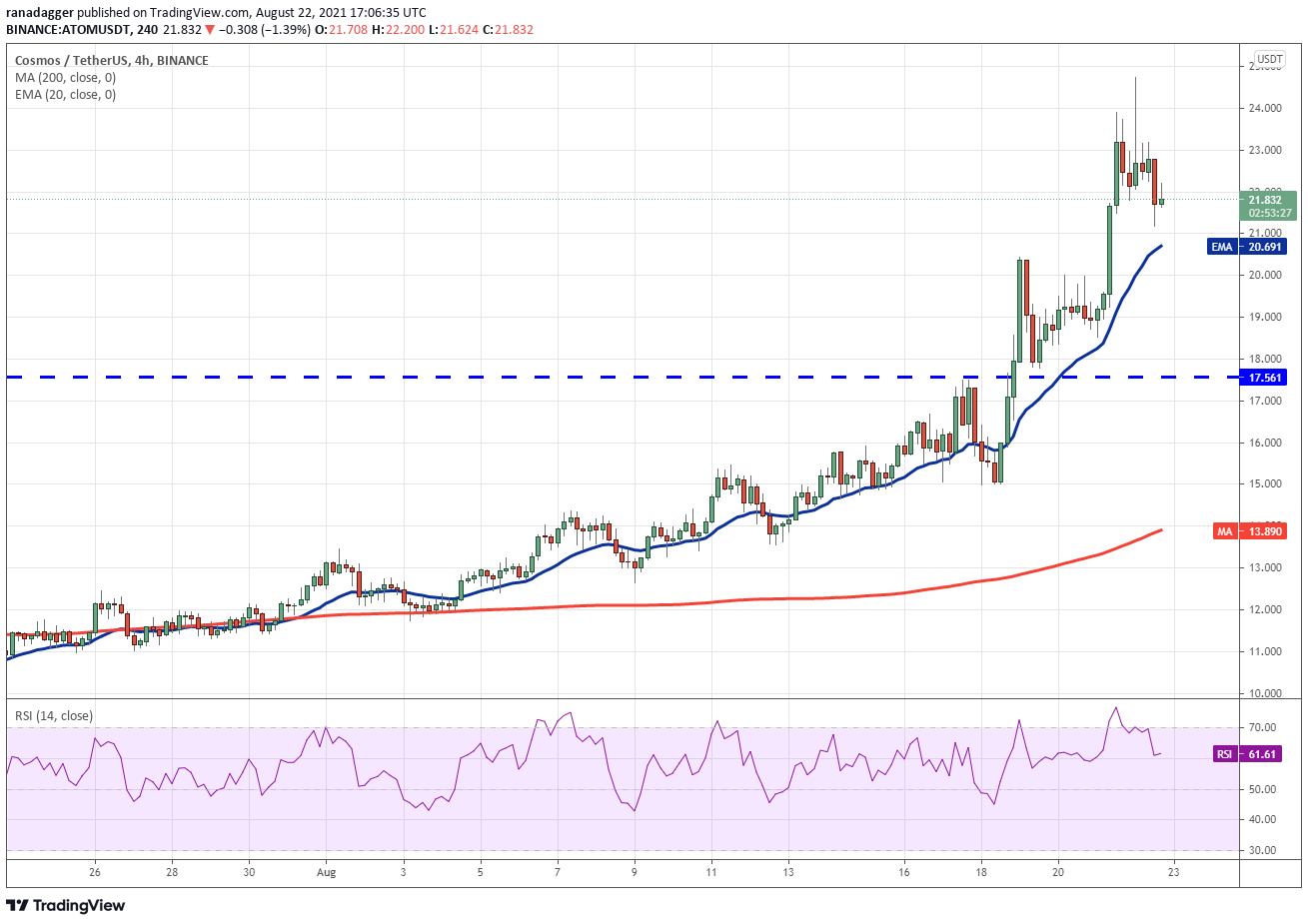 The 4-hour chart shows that bears are mounting a stiff resistance near $24. Although bulls had pushed the price above this resistance, they could not sustain the higher levels as seen from the long wick on the candlestick.

A positive sign is that buyers are not dumping their positions in a hurry. The pair could consolidate between $21 and $24 for some time. A breakout and close above $24 will indicate strength and signal the resumption of the up-move.

Alternatively, a break below the 20-EMA will indicate the start of a deeper correction to $17.56.

Bitcoin down almost 50% from year's high

Is Bitcoin Eco-Friendly? Ways To Invest Sustainably in Crypto