Bitcoin could pick up momentum above $56,100 and that could attract buying in DOT, UNI, LINK, and XMR. 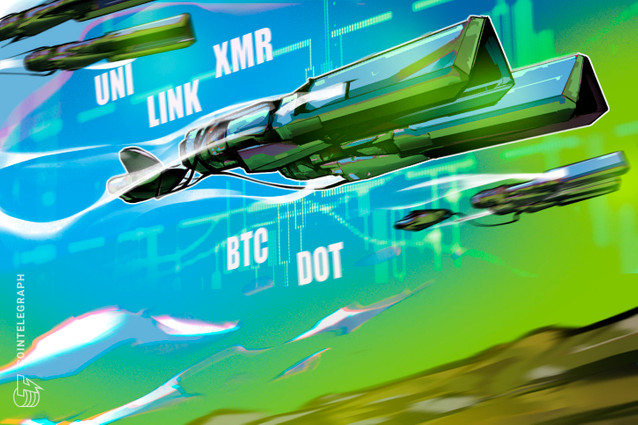 Bitcoin (BTC) has continued to trade near the $55,000 level. The sharp rally in Bitcoin has pushed its market dominance from 40.70% on Sep. 12 to about 45% today. This shows that the strong recovery in cryptocurrencies has largely been led by Bitcoin.

This sharp run-up in Bitcoin has pushed the Fear and Greed indicator into the Greed zone. Although this indicator suggests that markets may have run up quickly in a short time, it does not necessarily signal a confirmed short-term top.

History suggests that traders who sold their Bitcoin positions on this metric alone could have missed strong gains before the correction set in, as highlighted by Cointelegraph Marke analyst Marcel Pechman.

Could bulls extend the up-move and push the price closer to the all-time high in Bitcoin? If that happens, select altcoins may rally to the upside. Let’s study the charts of the top-five cryptocurrencies that could remain strong in the short term.

Bitcoin soared above the stiff overhead resistance at $52,920 on Oct. 6 and the bulls have held the price above the breakout level since then. This is a positive sign as it indicates that buyers may be holding on to their positions expecting higher levels in the short term.

The moving averages have completed a bullish crossover and the relative strength index (RSI) is near the overbought zone, suggesting that the path of least resistance is to the upside.

Contrary to this assumption, if bears pull the price below $52,920, the pair could drop to the 20-day exponential moving average ($49,504). This is an important support for the bulls to defend because a break below it could signal a change in the short-term sentiment.

The bulls are facing selling in the $55,750 to $56,100 zone but a positive sign is that buyers have not allowed the price to dip below the 20-EMA. This indicates that bulls anticipate a break above the overhead zone.

If that happens, the pair could resume its uptrend. The first sign of weakness will be a break and close below the 20-EMA. The RSI is forming a negative divergence, signaling that the momentum may be weakening.

A break and close below the 20-EMA could pull the price to the 50-SMA. A break below this support could start a deeper correction.

Polkadot (DOT) has been gradually moving higher toward the overhead resistance at $38.77. The RSI has broken out of the downtrend line and the 20-day EMA ($32.15) has started to turn up, indicating an advantage to buyers.

If bulls thrust the price above $38.77, it will invalidate the head and shoulders pattern. The failure of a bearish setup is a bullish sign as it may trap the aggressive bears who then try to cover their positions, resulting in a short-squeeze.

The DOT/USDT pair could then start its journey toward $49.78. Alternatively, if the price turns down from the current level or the overhead resistance and breaks below the moving averages, the pair could drop to $28.60.

A bounce off this support could keep the pair range-bound for a few days. The bears will have to pull the price below the neckline to signal their supremacy.

Both moving averages are sloping up and the RSI is in the positive territory, suggesting that buyers are in control. The pair could drop to the 20-EMA, which is likely to act as a strong support. If the price turns up from this support, the bulls will try to push the pair to $38.77.

This level may again act as a stiff resistance but if bulls do not give up much ground from it, the possibility of a break above it increases.

Conversely, if bears pull the price below the 20-EMA, the pair could drop to the 50-SMA. A break and close below this support could result in a decline to $31 and then $29.

Uniswap (UNI) has been holding above the 20-day EMA (24.55) for the past few days, which shows that bulls are trying to defend this support. However, the bears are in no mood to relent as they have not allowed the price to rise above the neckline.

The buyers will have to push and close the price above the neckline to complete an inverse H&S pattern. This bullish reversal setup has a pattern target at $36.98 but the rally may not be linear as bears will try to defend the level at $31.41.

The 20-day EMA is gradually rising and the RSI is just above the midpoint, suggesting that bulls have a slight edge. This advantage will be lost if the price breaks and closes below the 20-day EMA.

In such a case, the UNI/USDT pair could drop to $22. This level may act as a support but if bears sink the price below it, the pair could extend the decline to $17.73.

The 4-hour chart shows that the price has roughly been consolidating in a tight range between $24 and $26 for some time. Usually, such tight ranges result in the start of a directional move.

If buyers drive and sustain the price above $26, the possibility of a break above the neckline increases. That could start the march toward the next overhead resistance at $30 and then to $31.

On the other hand, if the price breaks below $24, the short-term trend may turn in favor of bears. The pair could then drop to $22.

Chainlink (LINK) broke above the downtrend line on Oct. 1, but the bulls have not been able to capitalize on this move. The altcoin has been stuck in a tight range between $25.20 and $26.19 for the past few days.

Both moving averages are flat and the RSI has been trading just above the midpoint, suggesting a balance between supply and demand. This equilibrium will tilt in favor of buyers if the price breaks and closes above $28.19.

The LINK/USDT pair could then rally to $32.11 and later challenge the stiff overhead resistance at $35.33.

Alternatively, a break and close below $25.20 could signal that supply exceeds demand. The pair could then drop to the $22 to $20.82 support zone.

The price turned down from the overhead resistance and bears have pulled the price below the moving averages. If sellers sustain the lower levels, the pair could drop to the support at $25.20. A break below this level could signal that bears are back in command.

Conversely, if the price turns up from the current level and rises back above the moving averages, it will suggest that traders are buying on dips. The bulls will have to push and sustain the price above $28.19 to signal that they are back in the driver’s seat. Thereafter, the pair could rally to $32.11.

The 20-day EMA ($263) is sloping up gradually and the RSI is in the positive zone, indicating a minor advantage to buyers. A break and close above the psychological mark at $300 could open the doors for an up-move to $325 and then to $339.70.

On the contrary, if the price turns down and breaks below the 20-day EMA, it will suggest that short-term traders may have dumped their positions. That could pull the price down to $250 and later to $225.

The bulls have repeatedly pushed the price above the downtrend line but the bears have not allowed the pair to sustain above it. The 20-EMA has flattened out and the RSI is close to the center, suggesting a balance between supply and demand.

If the price breaks below the 50-SMA, the short-term bulls may rush to the exit. That could pull the price down to $260 and next to $250.