Ripple: This is how XRP can break its all-time high within 2 months – analyst

According to “Credible Crypto”, the XRP price could break its all-time high within the next one to two months, provided that Bitcoin also overcomes its ATH.

The technical analyst Credible Crypto published a new XRP price analysis via YouTube a few hours ago. Using the Elliott wave theory, a method of technical analysis that looks for recurring long-term price patterns associated with ongoing changes in investor sentiment and psychology, he forecasts a sustained bull run for XRP.

As the analyst notes, after the consolidation in the $0.24 region, there was a strong upward momentum, as he expected. During the first wave, the XRP price rose to $0.33, after which it consolidated in the region by $0.21. Subsequently, the third wave began, which Credible Crypto analyzed as follows

I mentioned that the minimum target for the major third wave will be around $0.63. We have hit that minimum target, and now we can definitely go higher than one Dollar. This is the next major area of resistance. Then I am expecting some sideways movement before wave four, before a major wave fifth which could absolutely extend. 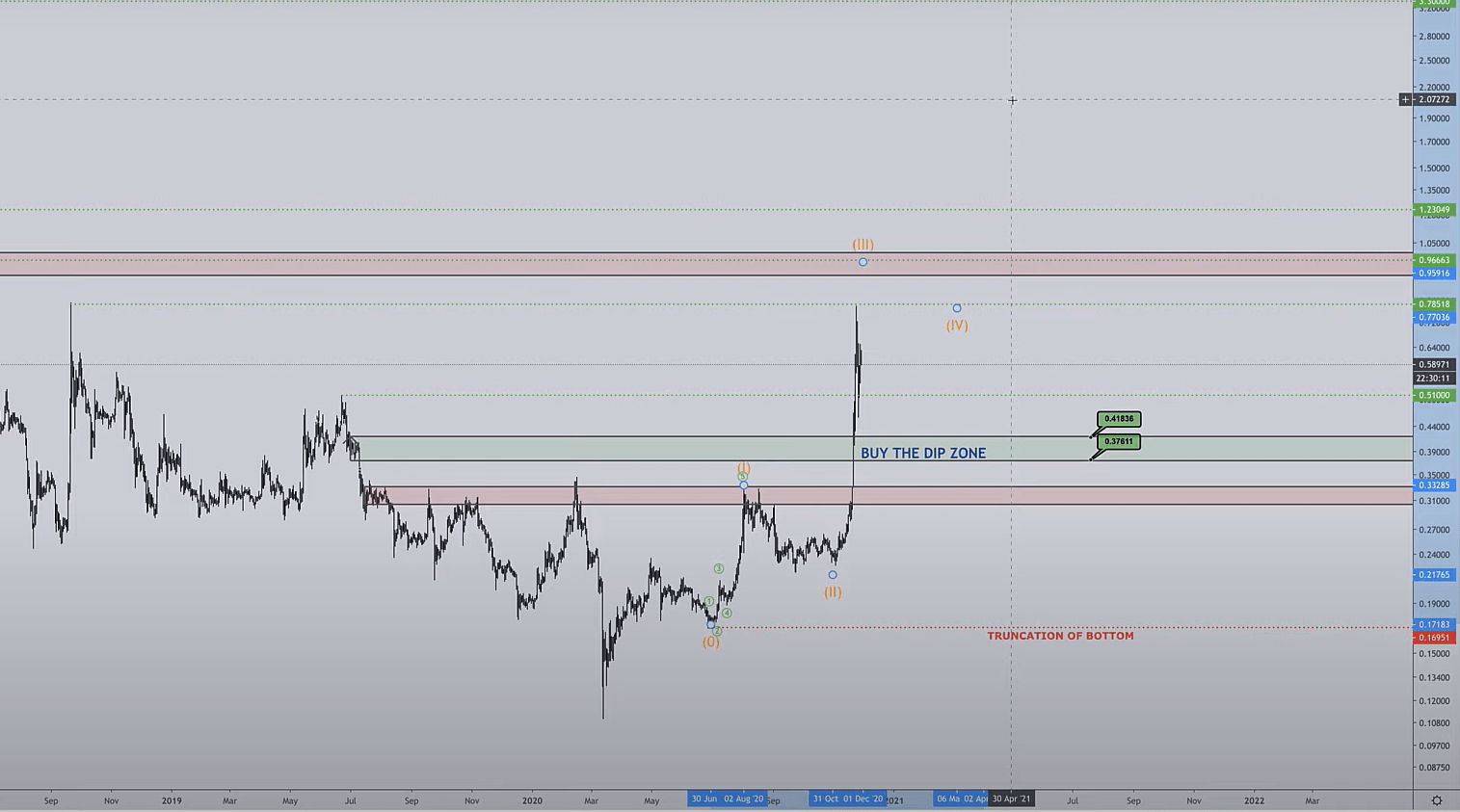 According to Credible Crypto, currently is not a good time to sell XRP. Considering past price movements and the current market sentiment, he believes it is not unlikely that the price could increase 10 times within a month.

However, this explosive price movement could also depend on the Bitcoin price. In earlier times, when Bitcoin broke through an all-time high, altcoins usually reached their all-time highs within 2 months. In this respect the analyst states:

But as Credible Crypto also pointed out, in the Elliott wave theory, it takes five waves to realize a parabolic rise. Currently, the third wave is not yet complete, which he expects to peak at $1.00, and has to overcome a strong resistance in the zone around $0.90. Thereafter, there could be a stronger correction (4th wave) to $0.78.

The analyst currently puts the “buy the dip zone” at $0.3761 to $0.4183, although in his opinion there is no guarantee that XRP will enter this zone again. The current dip to USD 0.45 could already have been the bottom. Furthermore, a breach below $0.33 is even less likely, although this would also invalidate the entire chart pattern.

As CNF reported, Credible Crypto is a well-known XRP bull and has already in several analyses predicted a price increase for XRP of more than 1,000% with a target price of 25 USD to 30 USD. At the time of writing, XRP was trading at 0.62 USD and showed a plus of 13% within the last 24 hours. The monthly chart shows a huge plus of 157%.

3 Worst Arbitrage Trading Mistakes To Avoid At All Cost

Ethereum and Ripple are exploding higher thanks to the growing interest...